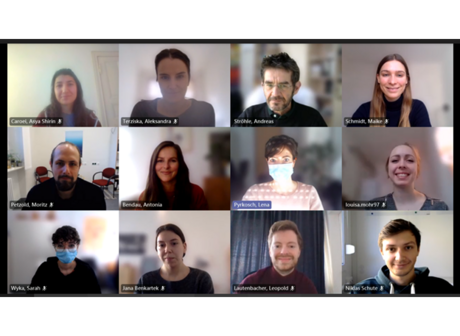 Besides our research work we also contribute to the clinical care of patients with anxiety disorders. With our special outpatient clinic for anxiety disorders ("Angstambulanz") we offer a multiprofessional team of physicians and psychological psychotherapists as well as multimodal treatment, particularly treatment of panic disorder, agoraphobia, generalized anxiety disorder and social phobia. After a standardized and thorough initial diagnosis, you have the option of receiving a disorder-specific psycho- and/or pharmacotherapy.

Further information regarding our activities in research and our range of treatments can be found at the website of the outpatient clinic for anxiety disorders.

Should you be interested in participating in a study and/or a therapy appointment, we would be very happy if you contacted us via telephone

Fear is a psychologically normal phenomenon that helps the individual perceive or assess threats and react appropriately in dangerous situations. A fear response begins with coordinated changes of activity in certain brain regions associated with fear (the so-called "fear-network") that are caused in reaction to a fear-inducing stimulus. These changes of activity lead to alterations in other biological systems, e.g. an activation of the vegetative nervous system or an increased release of the "stress hormone" cortisol. This ultimately causes changes in the organism (focusing perception on danger, redistribution of blood volume from the brain to the musculature, an increase in blood pressure, changes in breathing frequency, etc.) that enable the persons concerned to face the danger or flee from it ("fight or flight"). One can also derive the typical symptomology of a fear response from this process. It consists of a psychological component (e.g. "tunnel vision", a feeling that one’s surroundings are changing, a feeling of loss of control or fear of dying or fear of "going crazy") as well as physical symptoms such as a rapid heartbeat, trembling/shivering, dizziness, trouble breathing, nausea or tingling sensations. If a fear response occurs in situations which are objectively not dangerous or should the magnitude of the response surpass the real danger coming from the stimulus, it is referred to as inadequate fear.

While inadequate fears occur quite often in childhood or one’s adolescent years for developmental reasons and can oftentimes (but not always!) spontaneously get better or improve, a prolonged occurrence or new onset in adults indicates pathological fear. This "pathological fear response" is marked by the fact that it usually gets worse over time if it is not treated and ultimately leads to (obvious) psychological stress and a significant impairment of everyday life for the person affected.
Depending on the type or the triggering stimulus of the pathological fear response, the two currently leading diagnostic systems in clinical context and research (the "International Statistical Classification of Diseases and Related Health Problems" [ICD-10] and the "Diagnostic and Statistical Manual of Mental Disorders" [DSM-5]) differentiate between 5 or 7 categorical anxiety disorders: panic disorder, generalized anxiety disorder (GAD), agoraphobia, social phobia, specific phobias, separation anxiety in adulthood as well as selective mutism. Anxiety disorders as a group are the most common mental illnesses. Depending on subtype they can occur for the first time during different phases of life.

Independent of the disorder-specific symptoms or epidemiological particularities, similar (neuro)biological changes can oftentimes be found in all anxiety disorders. These include for instance a dysfunction of the fear network and persisting changes of the vegetative nervous system or stress hormone system. Particularly newer studies have also showed different genetic variations. A causal link between them and the previously discussed deviations is suspected. According to the "bio-psycho-social model" these findings however aren’t solely responsible for the development of anxiety disorders; instead they rather increase the vulnerability to develop a pathological fear response under certain circumstances which can subsequently take on a life of its own. In this context acute and continued stress as well as problematic learning play important roles in the development and maintaining of anxiety disorders. Especially the intertwining of different conditioning processes results in an initial stress-induced inadequate fear response being assigned to other situations with comparable characteristics. This ultimately frequently leads to the establishment of far-reaching avoidance behavior towards certain situations, topics or bodily symptoms that usually burdens and limits the person concerned.
Various therapeutic options for anxiety disorders can be extrapolated from these discussed "psychobiological" factors in the pathogenesis. Firstly, learning processes that make a person more vulnerable to the development of disorders can be corrected as part of cognitive behavioral therapy (CBT). CBT is the form of therapy that has the most proof of efficacy regarding anxiety disorders. By changing perceptions and judgements of anxiety symptoms as well as the reaction towards anxiety-inducing situations it is often possible to achieve an improvement or even a complete reduction of the respective symptoms. In addition, a drug treatment is another option. The primary goal here is to bring the activity in the fear network (back) to normal levels.

Heads of the working group