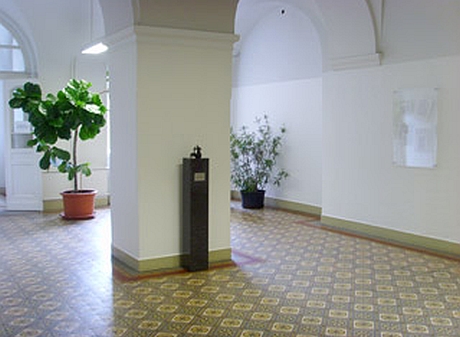 History of the Department

The present building of the Department of Psychiatry and Psychotherapy was built in 1900.

Redesign of the foyer - Remembrance of the National Socialist Era

According to the resolution of the advisory board meeting of the "Verein zur Geschichte der Psychiatrie an der Berliner Charité e.V." on 14 May 2007, the redesigned lecture hall and foyer of the Department of Psychiatry and Psychotherapy/Neurology were inaugurated on 9 April 2008. The aim of the redesign was and is to present the history of psychiatry at the Charité in an appropriate form in the psychiatric clinic, especially for the time during National Socialism.

In this context, a sculpture by Dorothea Buck (1917 - 2019; obituary for Dorothea Buck in The New York Times), an artist who became a victim of forced sterilization during the National Socialist era, was inaugurated on the occasion of a small ceremony. The sculpture is now standing in the entrance area of the clinic. Mrs. Buck wrote in a letter: "The small bronze 'mother and child' as a model of a 10 times larger bronze group expresses the relationship between two people, which is still missing in today's psychiatry due to the still inadequate conversations". Of course we hope that conversations and the consideration of the patients' will are part of the daily routine in psychiatry today. To provide an appropriate setting for the sculpture, the foyer was renovated and a panel was installed providing information on the artist's life and work, on her commitment in the context of patient initiatives and excerpts from her publications.

In this context, we had changed the location of the gallery of former professors, which had previously been located in the foyer. In accordance with the above-mentioned resolution, the portraits could then be viewed in the lecture hall, since the debate about the history of psychiatry and the crimes of National Socialism is also one about the use and misuse of science. In the course of the reproduction of the individual portraits and in the sense of honesty and completeness of the handling of history, the gallery was complemented, in accordance with the decision of the advisory board, by the previously missing portraits of the chair holders during the National Socialist era. In 2013 the lecture hall was redesigned to support the idea of the initiative "Zerstörte Vielfalt” (destroyed diversity), which commemorates the colleagues expelled during the Nazi regime (further information). Historical information can be found in the entrance area of the lecture hall, which - as a frequently used public space - presents the history and ethical questions of psychiatry, in particular to students and other persons attending lectures.

History of the Department of Psychiatry at the Charité

The psychiatric clinic exists since the beginning of the 19th century. After the foundation of the University of Berlin in 1810, it was affiliated to the medical faculty for the following years. In the 19th and 20th centuries, the psychiatric clinic at the Charité had an outstanding influence on the field of psychiatry. In its history spanning more than 200 years, the clinic has brought forth important neurologists, including Wilhelm Griesinger (mental diseases are brain diseases), Karl Bonhoeffer (acute exogenous reaction type) and Karl Leonhard (classification of endogenous psychoses).